While the Coronavirus is still dominating the news, at least we now can look forward to Baseball. The first game of the year will be between the Arizona Diamondbacks vs the San Diego Padres on July 24, 2020, at Petco Park. The Padres and Petco Park have always held a special place in the history of Watkins Landmark. The roots of WLC stem from that Project. Three out of the five members of our executive staff were on the Project Team at Petco Park which broke ground in the summer of 2000. The San Diego Ballpark Builders J.V. for Petco Park project, at the time just called “A Ballpark for San Diego”, consisted of the following general contractors: Clark Construction, Nielsen Dillingham & Douglas E. Barnhardt inc. At the time, our VP of Construction Dan Poulton was with Clark, our VP of Operations was with Nielsen Dillingham and I was with Clark. Working with quality builders such as Dennis and Dan has always been a joy to me. At the time, before Watkins Landmark was even a thought in my brain, I knew I wanted to continue to work with these guys throughout my career. Since then, I have been very fortunate to start my own company and bring these guys aboard. Hiring both Dennis and Dan aboard has also had the benefit of making Watkins Landmark Construction the best and most experienced Stadium and Arena Builder in Southern California. That statement has been proven out not only by our work at Petco Park but our projects at the Indian Wells Tennis Garden, Angel Stadium of Anaheim, SeaWorld, Cinemark Theater La Quinta, Pavilion Indian Wells Golf Resort, and the San Diego Jewish Academy.
Our first article in today’s newsletter is about the completion of our Eno Restaurant and the Babcock & Story Bar project at the iconic Hotel Del Coronado. On July 22nd, our Hotel Del project team obtained the Certificate of Occupancy on this Renovation / Tenant Improvement project for the historic restaurant and bar. Our article will go into a bit of the history of this restaurant and bar as well as provide pictures of the latest renovation. Congratulations to Billy “Captain America” Bagby, Matt “Viking” Dolan, Jerry Carter, Belen Tillet, Marco Pena, Mike Gallardo, and Jesse Nelson. Great job on meeting schedules and delivering a quality project to a happy client!
Our second article highlights the completion of our Urban Edge Condominiums project located in the Hillcrest neighborhood of the City of San Diego. This project is probably around the umpteenth project we have built for the Horine Group out of Carmel Valley. While this project had its share of issues, the finished product will add a very urban contemporary designed structure to the skyline of Hillcrest. The 4 story condominium project has 5 units, each with its own roof deck (5th Story) that has a 360-degree spectacular view of downtown San Diego, Point Loma & Mission Bay. Kudos go to our newest employee Robert Veague for powering this project across the finish line. Also on the project team were Dennis Dizon, Dan Poulton, Ruben Bravo, Molly Watson, Billy Bagby & Obhi Dewan. Great job to our project team for completing this challenging project.
Our Company Culture section expands on Watkins Landmark’s connection to baseball. As I stated above, Watkins Landmark not only has experience working at Petco Park but the Angel Stadium of Anaheim as well. While we are fans of both teams, our roots come from San Diego Padres and Petco Park. Among my many responsibilities while I was with Clark Construction, being the Project Manager of the Western Metals Building portion of the Petco Park project was one of my biggest career highlights. The Watkins Family also has deep connections to baseball. Connections that ended up with our branch of the Watkins Clan leaving rural Arkansas and moving to the west coast.
Thank you for all of your comments and suggestions for our newsletter over the years. We truly try to incorporate the best of the remarks into our periodical. You can always click on my name and email me at Jody James Watkins with any observations or critiques. 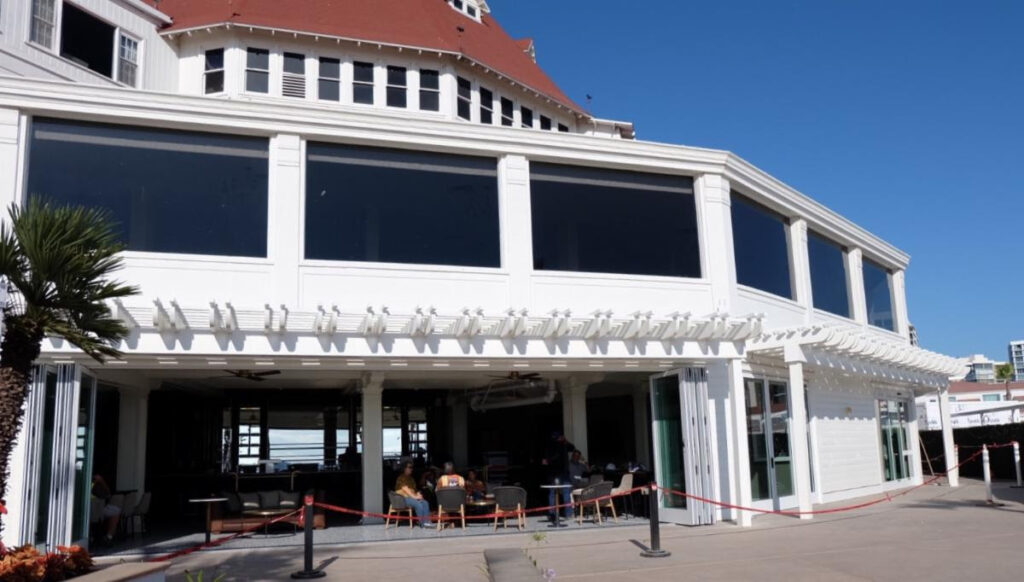 As stated above, Watkins Landmark obtained the Certificate of Occupancy on July 22nd, 2020 for the Eno Restaurant and Babcock & Story (B&S) Bar project. As is with everything about the Hotel Del Coronado, these projects have a significant amount of history. Especially the B&S Bar which was named after two members of the development team who opened up the Hotel Del Coronado in 1888. The photo above is the entrance to the B&S Bar right below the main iconic red turret structure. Watkins Landmark temporarily shored this side of the building to expand the entrance for an expansive accordion glass door. This widened opening gives the bar a very inside to outside seamless transition which provides the customer the relaxing beach culture ambiance they seek. It was also a very challenging scope of work. While temporarily shoring this opening, we permanently installed a structural retrofit of two columns and a large beam to carry the load of the entire turret. The structural columns and beams installed supporting the load of the most iconic turret on the main Hotel Del building. Obviously, this was a delicate installation in our construction process. The running joke among our project team was “Don’t worry, if it collapses, Watkins Landmark will only be mentioned in the lead story tonight on the local news. Possibly national.” Our Senior Superintendent on site Billy Bagby put together a flawless installation plan for the added structural members. The structural retrofit went off without a hitch. Great job to Billy and his field team!

Another scope in this renovation project was the restoration of the original bar pictured below dated 1935. The picture above is the finished restoration of this historic bar. The intricately detailed woodwork that makes up the structure of the bar is over 130 years old. The picture above shows the finished restoration of the bar. It can’t be said enough that the Hotel Del Coronado is the most iconic structure in San Diego. For a company whose goal is “To Build Landmark Projects”, it has and continues to be an honor to build multiple projects on San Diego’s most prestigious Landmark.

Our project team (pictured above) on the Eno Restaurant and the B&S Bar project deserves credit for a job well done. Billy Bagby, Matt Dolan, Belen Tillet, Marco Pena, Jerry Carter, Dan Poulton, Molly Watson, Mike Gallardo, and Jesse Nelson did an outstanding job building this challenging project during the Coronavirus lockdown. We were fortunate to work with a very experienced Owner’s Representative in Tom Rosa. Teamwork with Ownership, Architect, Engineers, Consultants, and our Subcontractors made this a very successful project all the way around.

Watkins Landmark Construction has recently obtained a Certificate of Occupancy for the Urban Edge Condominium project in the Hillcrest neighborhood of San Diego. The 5 unit building is four stories high plus a roof deck for each unit. The stunning 360-degree view of San Diego from the roof deck is shown in the above photo. As you can see above, the view from the roof deck captures all of San Diego on a clear day. Truly a place to smoke a cigar and watch the sunset.

Urban Edge was a very challenging project to build. First off, the lot it was built on is the size of a postage stamp. There was no laydown area outside of the foundation perimeter of the building. The structural engineering was very unconventional, to say the least. The first story is 80% parking for the Condo Owners that you can only access via the back alley. The structural steel beams that support the building in the garage look like they were designed to support skyscrapers in the Gaslamp Quarter in downtown San Diego. Eventually, credit goes to our newest Superintendent Robert Veague to push this project across the finish line. Robert’s hands-on superintending style was the boost of energy that this project needed to achieve the Certificate of Occupancy and finish the punch list. Great job Robert!.

The history of Watkins Landmark is deeply rooted in baseball. The Petco Park (at the time it was called A Ballpark for San Diego) project, which broke ground in 2000, brought my family from Indian Wells to Carlsbad. It also brought Dan Poulton, our Vice President of Construction to San Diego as well. It was at this time, we met Dennis Dizon. Dennis & I immediately hit it off and began discussing the possibilities of going out on our own in business someday. At the time it was just a far fetched dream, but it was the beginning of the idea which would eventually lead to Watkins Landmark. The roots of our company were founded at Petco Park.

While I can’t play baseball worth a damn, the sport has roots in my family as well. My Granddad, Byron Dewey “Jake” Watkins was a minor league baseball player during the 1940s and 50s. He was signed out of Waldo, Arkansas, and never looked back. Looking up his statistics on the minor league history website, I am shocked he did not make the majors. His career batting average was .324. I never asked him while he was alive why he did not make the majors. Now I wish I did. Some of his teammates back in the day included Whitey Ford and Earl Weaver. When asked about him, I jokingly say my Granddad was the inspiration for ‘Crash Davis’ in the movie Bull Durham.

Twenty years since working on the Petco Park project, Watkins Landmark still has several Padres’ nights every season for our employees as well as their families and friends. The picture at the top of this article is from 2009 when Watkins Landmark still had less than 10 employees. As well as having our own season ticket packages, our subcontractors such as Berg Electric, Helix Electric, Pacific Southwest Structures, and Landcare Logic have been more than generous in sharing their tickets. The seats we are sitting in above were compliments of Craig Gerber, CEO of Landcare Logic. If I missed naming another one of our other great subcontractors who have treated us to a Padres game (such as All Phase Drywall), my apologies. While we are all suffering through this lockdown, looking forward to attending sporting events in the future is a very pleasant thought. As I am finishing this newsletter, the Padres are 2 – 0. That doesn’t happen every year!